Part 3: Nothing ventured, Nothing Gained 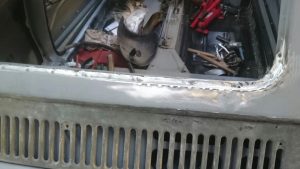 We love the Fiat 500 here at The Classic Car Company and back in early 2014, we were nearing the end of a number of Fiat 500 projects when our head technician quipped “you better get me the next one then”. Whilst the idea of sourcing another project car was a good one, the situation surrounding the search was far from ideal!

This is the third part of our series on Fiat 500L restoration. If you’ve not yet read part one and two head over there to read it now!

I am not going to pretend otherwise, the extent of the work needed to return this ‘cinquecento’ to the road shocked us! An immediate solution or plan wasn’t forthcoming, so our focus moved onto other projects for a few months, and the stricken shell was protected with a light primer and rolled to the corner of the workshop. 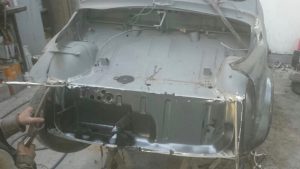 One day, a few months later, the boxed up parts of the stripped car caught my eye and brought the project back to the top of my mind. I was still determined not to let this project beat us, so I began to tap away at a calculator in an attempt to cost the job! After some serious negotiations with our suppliers in Italy, we decided to revive the restoration! At least we could say this would really be a nut and bolt restoration with every panel of metal being new.

The shell went into the bodyshop, along with all the new body and floor panels. Our welder called us all the names under the sun, some in English, some in Italian, all understood, and claimed he would never get the car straight!

All four wings and arches were removed, along with both sills, floors, and the whole front. The actual shell that we were left with was in pretty good shape. The only area that needed attention was the rear window surround. A section of the bottom offside corner was cut out and replaced with new metal. 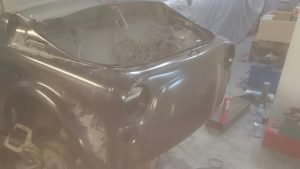 After that the front was rebuilt. Starting at the front is the key to ensuring that the bodywork lines up straight on a 500.

A new inner front panel & battery tray were let in, followed by the outer front panel, arches and wings. This then allowed the new sills to be lined up correctly, and critically, with the new doors in situ as well.

After that, the pair of half floors and the rear quarters and arches followed suit, and that familiar 500 shape was back!

There was, as always, some skilled lining up to do. But this is the difference between a good job and a fast job. As our welder always says ‘any idiot can fit new panels – the skill is in lining them up and this takes time’. The right amount of time was taken, and eventually, we had a body to move into the paint shop! 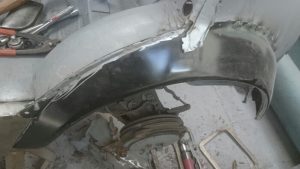 We’ll be posting more about this restoration project in the coming weeks so make sure you are following our posts on Facebook and check back regularly for updates.